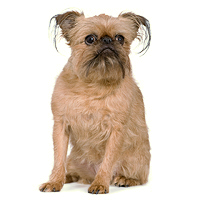 Recognized By
AKC
Country of Origin
Belgium
Life Expectancy
12 - 15 yrs
Height Range
7 - 8 in
Weight Range
8 - 10 lbs
Colors
Red, beige, black & tan, or black. No white hairs or markings
Trainability
Can be good with a skilled and patient trainer; they tend to be stubborn
With Children
Good with older children; can be nervous around overly active younger children
With Animals
Very good; does well with other dogs and cats
Climate
Intolerant of cold weather
Indoor/Outdoor
Indoor with some outdoor time preferred; can do well in apartment/condo
Exercise Reqd
Moderate to high; walks and play time are sufficient
Grooming Reqd
Proper coat requires regular brushing and hand stripping by a knowledgeable groomer.

Submit your own
Brussels Griffon Pictures 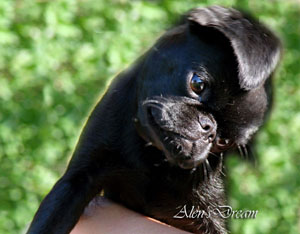 Report this picture to QualityDogs.com staff
Posted by a visitor from Denmark 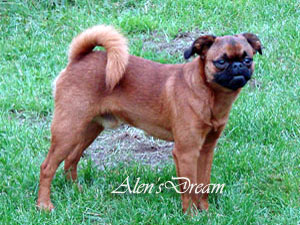 Report this picture to QualityDogs.com staff
truly ties our family together
Posted by gray family from green Ohio 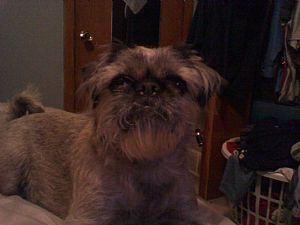 Report this picture to QualityDogs.com staff
Ripley and Lola Our Beloved Gr
Posted by Jim and John from Fort Lauderdale 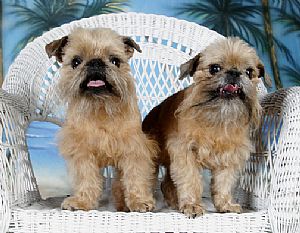 Report this picture to QualityDogs.com staff
Posted by mckenna from Phoenix arizona 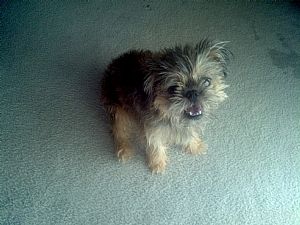 are you going to house break him?if so i would get wee wee pads.my dog tried to eat the wee wee pads though, so we used neaewppsr.if it's a puppy definitely get some chew toys, cause he'll be teething.and toys in general are going to be a great way to bond with your dog.Tug toys, balls, squeaky toys, etc be careful on the balls though, get ones that your dog can't get stuck in his throat size wise.
- Posted by Georgiaman from LMrAwdWQXJuAq
Post Your Brussels Griffon Comment

The following conditions may be a concern in the Brussels Griffon: