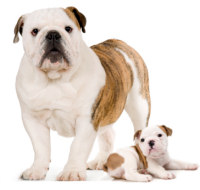 The Bulldog At a Glance

The Bulldog photos below have been submitted by site visitors. If you have or had a Bulldog and have Bulldog pictures you would like to submit, click the link below!

Submit your own
Bulldog Pictures
Scarlett
Posted by Steve 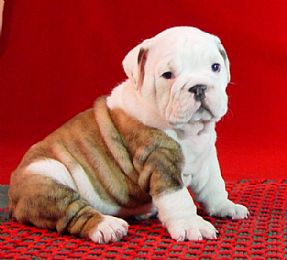 Report this picture to QualityDogs.com staff
Harley
Posted by Eddie from Greeley Colorado 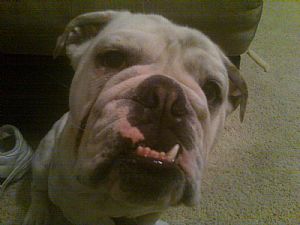 Below are user-submitted comments about Bulldog behavior, Bulldog training, Bulldog health, and more. If you have experience with or just an interest in the breed, you can post your comments by clicking the link below!

Bulldogs are so much fun and so cute to watch! They love their owners and they also like other people. They can be dog agressive if not socialized. Bulldogs are prone to allergies. Feed them a high quality grain free food with no by products, soy, or corn to ensure a good coat if they have food allergy. Also, they are shedders so brush daily. Give a probiotic to help with digestion and gas issues. Give lots of love and affection! And be very careful when it's hot outside.
- Posted by Brittany Wood from Dalton, GA
Some people think that Bulldogs' tails are docked when they're born. Actually, they are born with a very short tail. It should either be spiked, meaning it's short and straight, or "screw-tailed," meaning it's curled up very tightly, so much so that it can look like no tail at all. Because of the very short tail, there can sometimes be a fold of skin around the tail, creating a kind of skin pocket there, that needs to be kept clean, just like the face wrinkles.
- Posted by Steve from North Carolina
Another important thing to know about Bulldogs is their coat. Although they are a short-haired breed, they do shed quite a bit. As they MUST be indoor dogs, any prospective Bulldog owner should be prepared for the coat care. Daily brushing outside will help get rid of the dead hair, and bathing and nutrition can help, but be prepared to vacuum a lot!
- Posted by Elizabeth

Our bulldog has been remarkably easy to train. She was housebroken after only a week or so. She has learned many commands and was the star of her puppy class. The only thing we're still working on is not chewing furniture when we're not there.
- Posted by Kim from Chicago, IL
I love some of the great names Bulldog owners have chosen, like Churchill, Tillman (the one on TV), Winston, Bentley, etc. They sound so distinguished!
- Posted by AJ
Our bulldog had REALLY bad problems with gas. We called them "air presents." He would give them to us quite often!! Especially when we had company. But our vet mentioned that it's often a particular grain in dog food that a dog may be sensitive to, and can cause stinky gas, so we tried a few foods until we found one that didn't cause the stinkbombs!
- Posted by Brian K. from Portland, OR
I grew up with a Bulldog, and he really was like having a little brother. Sometimes he would chew up something and my mom would scold him, and he would just pout around like a little kid.
- Posted by Amber from New York, NY
I heard that all Bulldog puppies have to be born by C-section, and that is why they are so expensive.
- Posted by Belinda from Milwaukee
I really love Bulldogs and want one someday. I love the way they look so tough and mean but they're really just big soft babies.
- Posted by Karrie from Kansas City
Post Your Bulldog Comment

One of the most distinctive breeds in appearance, the Bulldog has changed dramatically over the years. Originally bred for bull- and bear-baiting, their origins have defined much of their appearance. Their strong jaws and short muzzle were perfect for hanging tenaciously onto a bull, and their front-heavy weight distribution and short back made it difficult for the bull to shake them. Although today's Bulldog retains many of those physical characteristics, the personality of the modern Bulldog is completely different. They are loving, gentle dogs who live for human attention but demand very little. They love to play, but rarely initiate it. Their docile, tolerant, and attentive nature makes them excellent with children, although older Bulldog puppies can be a little too playfully strong and clumsy for toddlers. As adults, they're more careful and passive about play, but they never completely grow up.

It is a widely-held misconception that Bulldogs are not very intelligent. In general, they are actually highly intelligent dogs who want to play, cuddle, or have their tummies rubbed, rather than learn some obedience trick. However, if you can keep it fun, they can learn the basic commands. Their true intelligence, though, is more subtle. They are masters at figuring things out... most especially figuring out how to get their way. In fact, they often think 'no' means 'wait until I'm not looking;' they are great at making you think they can't reach the table, or the bed... until you're not looking; and if all else fails, they're masters of the guilt trip. They seem to know that the sad, pouty face and the carefully-placed sigh can get them most anything. They truly have a human-like quality, and their feelings are easily hurt. But they're quick to forgive, especially with a treat and a hug!

The Bulldog is not a demanding breed by nature, but they do require a family to have a strong knowledge of the breed and its healthcare requirements. If you aren't willing to commit to possible frequent vet visits, then a Bulldog isn't for you. The breed is essentially man-made, and they have been bred for specific physical traits. Unlike most breeds, where nature has shaped their physical characteristics to fit their function and their environment, Bulldogs aren't built for thriving in any natural environment. So before welcoming a Bulldog into your home, the first step is to become knowledgeable about the breed, and the second step is to find a vet that is experienced with Bulldogs. That is not to say that Bullies can't be healthy... they simply rely on you to keep them healthy, and to care for them in general. One critical note: Anesthetizing any dog has its risks, but with Bulldogs, it is very serious. Because of their unusual airways and difficulty breathing, the muscle relaxation that comes with anesthesia can easily cause their airway to collapse. Sadly, many Bullies have been lost in simple, non-emergency procedures that involved anesthesia. That is but one reason for finding a vet that is very experienced with the breed. It is also a reason that breeding is undertaken by only the most knowledgeable, experienced, and committed families... over 90 percent of litters are born via Caeserian section, and care of the newborn puppies is extremely difficult.

Overall, the Bulldog can be a wonderful addition to your family, if you are willing to commit the time to learn about the breed and provide the proper health care. Equally importantly, they need your time, companionship, and love. In return, you will get unconditional affection (except for the occasional pouting) and a delightful, often comical friend.

The following conditions may be a concern in the Bulldog: