back to
Great Pyrenees Puppies For Sale

Registration:    AKC
We were blessed with a healthy litter of five boys and 1 girl on April 16. At three weeks they are so beautiful and all weigh over six pounds. Both sire and dam tested OFA (Orthopedic Foundation of America) good in everything from hips, elbows, knee, eyes, heart. Additionally they are NDG clear and have Sire achieved his championship the week he turned 8 months, his Grand Championship when he was 13 months, and his Bronze level Grand Championship at 18 months. He finished the year 2014 as #8 Ranked Great Pyrenees in 2014. He also passed his Therapy Dog test in 2014. He achieved titles of AKC Star Puppy and also Canine Good Citizenship Advanced. Additionally he has three versatility titles recognized by the Great Pyrenees Club of America — VA Versatility Ambassador, VE Versatility Emissary, and VX Versatility with Excellence. Mandy has four points toward her championship, and will finish her AKC championship as soon as she finishes her duty as a mother.
Health Guarantee  |  Breed Club Membership  |  Health Testing  |  Owner Contract  |  Show/Event Participation 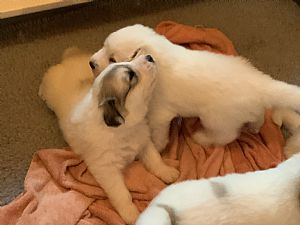 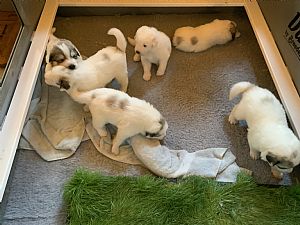